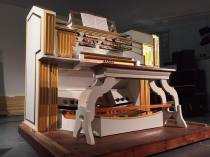 The 2/5 and Melotone Compton (No. A360)
organ was opened in December 1936 by Neville Turner.
The pipework was installed in a large chamber to the
left of the proscenium arch and the console (complete
with illuminated surround) was installed on a central
lift in the orchestra pit. It is believed that the organ
cost nearly £8,000.

The instrument was relatively small having only
five ranks of pipes. Alongside the usual real
percussion instruments was an Electrostatic Melotone
unit which provided a Vibraphone effect as well as a whole host of other electric sounds.

In 1967, the organ was installed at Weavers Road School in Wellingborough where regular concerts were held into the early 1980's. The organ became used less and eventually, it sat practically forgotten until in 2004, members of CCOC made enquiries about it. This led to it's eventual purchase in 2007.

Bilston Town Hall was officially re-opened on Friday 19th September 2010 by The Right Worshipful the Mayor of Wolverhampton, Councillor Mrs Christine Mills. Prior to this, the Compton organ was played in its new home for the first time by Cameron Lloyd whilst champagne was served to the invited guests. Lord and Lady Turner of Bilston were also in attendance as well as several Council officials and past Mayors.

The Compton is now used every Thursday, for tea dances, with Cameron Lloyd at both the Compton and Yamaha organs.

The future plan is to enlarge the organ by another few ranks.