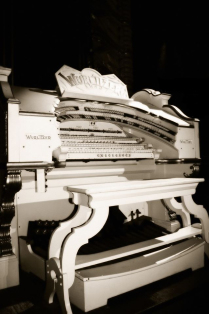 When the 1911 Opera House in Blackpool was re-built within the shell of the old one at the end of the 1938 season, the decision was taken to install a Wurlitzer organ.

Designed to the specification of the Empress Ballroom's organist, Horace Finch, it contained the following 13 units:

There was also a Master Xylophone (unenclosed) and a Grand Piano.

The opening ceremony of the new Opera House took place on the afternoon of 14 July 1939 by Jessie Matthews. Horace Finch and Reginald Dixon demonstrated the Wurlitzer which is reputed to have cost £5,000. The first actual performance took place at 8:00pm that evening with George Formby on the largest stage in England.

Following the disastrous fire in the Tower Ballroom in 1956, the Gamba and the Tuba Mirabilis were swapped for the Tower's Solo String and British made Tuba Mirabilis.
The Wurlitzer received much needed attention in 1993, when it was used for a 'Gang Show' and other live performances until one chamber was emptied for use in the stage show of 'Cats'. Fortunately the contents were returned!
This was the last Wurlitzer ever to be shipped from America to the UK

The Cannock Chase Organ Club took over work on the Opera House Wurlitzer in late 2007, with the first concert occurring...