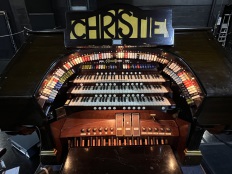 The Gordon Craig’s Christie was built by a North London company, Hill, Norman & Beard Ltd, and was installed in the large Carlton Theatre at Tuebrook, Liverpool, which opened in 1932.  The console was located on a lift in front of the stage.  The Carlton Theatre’s secretary wrote to The Christie’s manufacturers later that year to tell them how his customers were ‘delighted’ with the quality of sound from the instrument and that the Organist, James Bell’s interval performances had become an ‘outstanding attraction’.

The organ was played regularly until the mid-1950s but by the early 1960s had been removed from the cinema and Carlton’s cafe had been closed and converted into cinema offices.  The Carlton was reconstructed in 1972 but with its seating capacity reduced by two-thirds.  The Christie was then transferred to the Stotfold Ex-Servicemen's club, when member, a local organist, Bob Simpkins was keen to have a cinema organ back in the building and purchased the Christie from Charles Smith and with help from Phil Burbeck and Rupert Kettle, installed the pipework in chambers under the stage.  The Christie re-opened at its new Bedfordshire home in September 1963, played by the well-known organists William Davies and Jackie Brown.

The Organ Society started to look for a new home for the organ and negotiated to purchase it from the Social Club if they could find somewhere suitable.  They approached the Gordon Craig Theatre management, who after seeing the instrument played by a society member, Bob Freeman, agreed to undertake a feasibility study to see if the theatre could accommodate the instrument.  It transpired that the auditorium was very suitable, with enough space to the right of the stage to house two pipe chambers which would return the Christie to its original design. The re-homed Christie had its Grand Opening Concert at the Gordon Craig Theatre at 3:00 pm on Sunday 27th September 1987.  Tickets were £2.50, with a reduction to £2.00 for Organ Society members.  Five famous organists performed that afternoon; Frank Fowler (Managing Director of Hill Norman & Beard), George Blackmore, Joanna Fraser, Janet Dowsett, and finally William Davies. After many concerts at the theatre, the society was disbanded, and there hasn’t been a Christie Organ Concert at the Gordon Craig since 2011.

In early 2022, Edd Hordley approached the theatre, and after visiting the building we are proud to announce we are working hard with the Gordon Craig Theatre to bring organ concerts back to the venue.