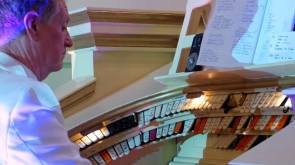 Since the removal of the original Wurlitzer theatre organ, The Cannock Chase Organ Club offered to install our own organ in the Empress Ballroom.

Negotiations initiated with the Winter Gardens Management in 2010/2011 and plans were set out in 2012 when work commenced on installing a new theatre organ. As this sort of instrument is no longer manufactured, many components had to be sourced from the USA, Canada, South Africa and across the U.K. The majority of the pipe work in the new organ is Wurlitzer, with a majority of the chests were built by the John Compton Organ Company, a British firm. We also procured one of the original ranks of pipes from the original Empress Ballroom Wurlitzer, the Tibia Clausa which is now back "home" in the new organ.

Cannock Chase Organ Club needed to man handle every part of the organ from the ground level up several flights of stairs and across the Empress Ballroom roof top to the pipe chambers, which was no easy task, even for the younger members of the team.

The first element to be installed was the Swell Shutters. After these were installed, the rest of the instrument could be assembled behind those.

There are 14 ranks of pipes in the new Empress Ballroom organ, which range from just a couple of inches long, to whopping 16ft long bass pipes. Each rank has it's own unique sound, from the Diapason - a basic church organ sound, flutes, pipes which mimic violins in an orchestra, the "Vox Humana" - Latin for human voice. There are reed pipes which imitate trumpets, tubas, oboes and saxaphones, not to mention actual bass drums, glockenspiels, cymbals and xylophones.

The new Empress Ballroom Wurlitzer was unveiled in December 2014 with the Mayor of Blackpool, Val Haynes, and Reginald Dixons Daughter, Jill, cutting the ribbon. Each gave a speach, as did Reginald Dixons Biographer, Peter Ashman. With the ceremony over, dancing commenced to organists Cameron Lloyd and David Lobban, on the huge dance floor with some 900 people present on a cold winters day. The new Empress Ballroom Wurlitzer has been used since its opening last year, for dancing, open days, tours, and it is going to play part once again in the Winter Gardens open day in 2016, an annual event which is well attended by the public who wish to see behind the scenes.