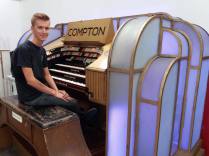 This art deco cinema organ was installed in 1937 in the Regal/odeon cinema, guernsey. It was opened by famous BBC organist, Reginald Foort. and later regularly played by the resident organist, the late Edgar Blampied, until 1982.
The organ was obtained by L.C. Pallot from the Guernsey Administration in 1982 before the cinema was finally demolished.

This Compton consists of 3 manuals (or keyboards) and 8 ranks (or sets of pipes). The organ pipes are located in two chambers on the balcony to the left of the console. This is a rare example of a fully original Compton.

Cameron Lloyd and Edd Hordley have spent a number of days working on the Compton in the past few years, bringing it back to playing standard. The organ was formally opened to the public again on the 16th of September 2017, where Cameron played the Compton for the morning of the museum's annual Steam and Threshing Fair. This is the first time the organ has been played in public in over 15 years!

We are liaising with the museum regarding starting concerts/events on the Compton - Watch this space!