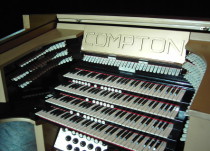 Wolverhampton Civic Hall was home to the Mighty 4 manual 57 rank Compton organ, originally installed in 1938 as 53 ranks plus a Melotone (electrostatic) unit.

The organ was used for regular light classical and theatre organ concerts and was also, on occasion, used for dancing.

The organ was enlarged from original specification  with four theatre organ ranks (Tibia Clausa, English Horn, Brass Saxophone and Kinura) which helped in it's function as a useful Civic organ.

Due to "possible asbestos contamination" of the organ, the largest of its kind built by John Compton company has already been scrapped as contaminated waste.

Steve Tovey worked tirelessly in his time as Wolverhampton City Organist, to keep this organ in playing condition for all to enjoy. The organ saw numerous restorations and improvements under his watchful eye, thus making it one of the finest example of Compton’s work right until the end.

We would like to thank everyone that has supported us and this instrument for the past decades, and to everyone who has fought to attempt to continue Steve’s work, in keeping this instrument in the public eye.