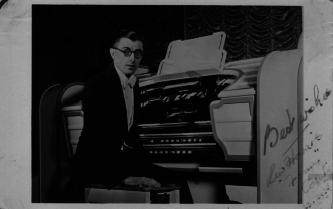 The Forum Cinema Coventry Conacher was built in 1934, under the supervision of Reginald Foort, and was opened by the great man himself. It is 3c/8, and included a grand piano, sadly no longer with the organ. In 1965 the organ was removed to Northampton Boys School where it suffered from a poor installation and ultimately fell silent by the 1990s, in 2006 it was purchased by a private individual in the Canterbury area.

In February 2018, the organ was purchased by club member, and professional organ builder Carl Heslop, and has moved back to the Midlands to hopefully find a home somewhere suitable to provide a showcase for this somewhat more rare builders work. Restoration has already begun less than a week after returning the organ to the Midlands, and it is hoped that it will be in a playable condition soon. Carl looks forward to working with the clubs assistance on the restoration and reinstallation of this fine organ in the not too distant future.